Rene` was born in Johannesburg, on the 17th March, 1918, to Jack and Marion Miller-nee Green. She and her five siblings grew up on a farm near Ladybrand, in the Free State. They were schooled in Ladybrand. She then went to Wits, where she became a teacher.

She met and married Harry Morris Wolfsohn, who was doing a medical locum in Ladybrand. They moved and lived in Kimberley, where both were involved in every aspect of community life.

An able, capable mother, she became Commissioner of the Girl Guides, Lady District Suprendent of the Order Of St John Ambulance, where she was invested a number of times, to the highest rank –a Serving Officer.
As wife of the President of the Kimberley Jewish Community for very many years, she participated in all Civic affairs-Jewish and other. She was also involved in all facets of many welfare organizations of which she and her husband held the chairmanship.

Their home was the gathering point for people from all over the world, who visited Kimberley; and often had dignitaries staying with them. Her beauty, grace and dignity were well known- she epitomized a true Lady to her fingertips.

A warm outgoing, compassionate, humble man, who loved the outdoors-the beaches –swimming, mountain climbing, picnics and walking in the forests.
Harry became a doctor, graduating from The Cape Town Medical School. He did various locums-and in doing so, He went to Ladybrand, in the Free State, where he met his future wife, Rene Miller. They married and moved to Kimberley, where he spent some years as a house surgeon at the Kimberley Hospital.

Harry was a man of unbounded energy and exceptional ability and whatever he undertook he carried out with a thoroughness that earned him the admiration of all. In the realms of social welfare and public health, he never spared himself; making no distinction of colour, race, or creed.
It was due to his formidable efforts, vast knowledge and tremendous energy that Kimberley and the surrounding 3000 square miles, under Harry’s jurisdiction, was spared the ravages of infectious diseases like diphtheria, typhoid, poliomyelitis and smallpox.

Harry applied his great organizational ability and hard labour to the establishment of the Anti-tuberculosis Association. It was solely through his efforts that the ‘H.M. Wolfsohn Santa Settlement’ was established. It bears his name and stands as a tribute and monument to his great work.

Harry was also instrumental in building a much needed Coloured Creche and health centre in the township-also named after him, to honour his endeavours.
His mind was ever active and he was constantly planning and carrying out various schemes for the betterment of the health and daily life of peoples of all races and colour.There was practically no welfare committee on which he did not serve and pull his weight. In fact, when he died, he was chairman or president of 36 committees!

Harry was appointed by the Minister of Social Welfare as a member of the National Welfare Organizational Board. He sat on many National Government advisory boards: Central Santa Committee, Child Welfare, Social Welfare Mental Health Cripple Care Alcoholic Rehabilitation and National Cancer. As an expert in so many fields, he attended and read papers at the annual conferences of the Medical Association of South Africa.

Aside from his all-enveloping work, Harry was a notable Freemason, much honoured. He was invested a few times to the Order of St. John, he was a Serving Brother of the Order.

For many, many years, he was the President of the local Jewish Community. This in itself was a Full time job! When he died, a tallis was put over the presidential seat in the ‘Box’, and remained there for a year, in his memory.
His Kimberley memorial service was attended by thousands of people from all walks of life, many grateful for what he had done for them personally. There were rugby stands outside the shul to accommodate the overflow mourners, with loudspeakers to enable them to hear the service. His burial in Cape Town was attended by many dignitaries who flew in to represent their organizations.
In addition, Harry was a skillful artist, a philatelist, a bowler of note, an avid reader and writer and even a bricklayer-helping to build the Isolation Hospital! 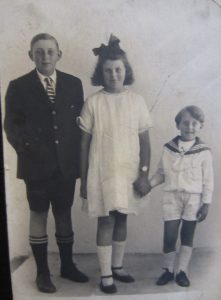 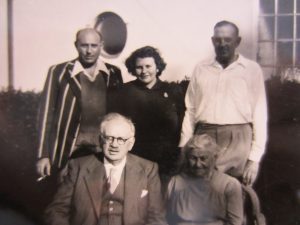 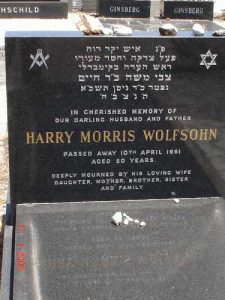